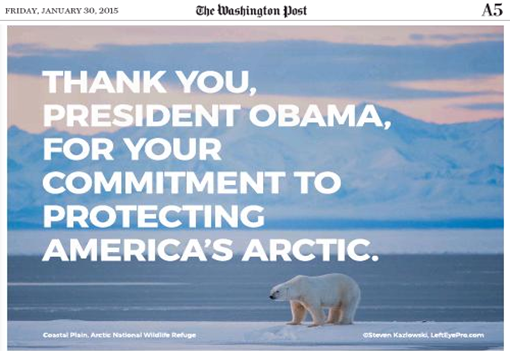 Recommendation rolls back pro-development position from the Reagan era

WASHINGTON – In a significant moment for the Arctic National Wildlife Refuge, today the Obama administration became the first in history to make a Wilderness recommendation for the Refuge’s Coastal Plain as part of its preferred alternative in its final Comprehensive Conservation Plan and Wilderness Review.

Through this recommendation, the U.S. Fish and Wildlife Service recognizes the value of the Arctic Refuge as a remarkable, wilderness quality ecosystem that supports a full spectrum of sub-arctic, arctic and marine habitats. The Refuge’s Coastal Plain in particular provides crucial habitat for muskoxen, wolves, migratory birds, caribou, mother polar bears and their cubs, and since time immemorial has provided sustenance and sustained the culture of the Gwich’in and Inupiat people.

Since its creation, support for the Arctic Refuge has been diverse and nationwide. During the public comment period for the CCP, the Fish and Wildlife Service received more than 1 million comments in support of Wilderness for the Arctic Refuge and in opposition to oil and gas exploration and development. Alaskans showed overwhelming support at public hearings and sent thousands of comments including from 100 businesses across the state from Kaktovik to Juneau.  Furthermore, support for the Refuge over the years has been bipartisan and today, members from both parties continue to come together to safeguard our natural heritage.

Conservation, religious, tribal organizations and citizens from across the country who have stood strong to protect this piece of America’s Arctic coast are celebrating USFWS’s positive, proactive decision to move forward with additional protections to the Arctic Refuge’s Coastal Plain.  Americans value all elements of Wilderness, including rich opportunities for solitude and primitive recreation. The Arctic Refuge is one of the only places on earth where large herds of caribou are free to roam, similar to the days when herds of buffalo roamed the West. We must protect this iconic American wilderness for the future.

This recommendation is a critical step toward a congressional Wilderness designation and establishes the Obama administration’s support for Wilderness protection for the Coastal Plain – reversing the Reagan administration position in favor of oil and gas development. This important administrative plan for the Arctic Refuge will guide management decisions for at least the next 15 years, and marks the first time the pendulum has swung in the direction of additional protections for the Refuge since 1980. The next step is for the president to transmit his Wilderness recommendation to Congress, and for Congress to pass Wilderness legislation.

For thousands of years, the Gwich’in people have regarded the Coastal Plain of the Arctic Refuge as “Iizhik Gwat’san Gwandaii Goodlit” or “The Sacred Place Where Life Begins,” because it has been the most frequently used birthing and nursery grounds for the migratory Porcupine caribou herd. This caribou herd is the foundation for the social, economic and spiritual fabric of the lives of the Gwich’in people.